Aparna, Kruttika and I recently wrote a short review article on insect bacterial associations, that was featured in the March 2017 newsletter of the Indian Society of Cell Biology. We’d like to share it here since it might be of general interest. Enjoy!

The world around us is full of microbes that influence both biotic and abiotic components of ecosystems. For instance, nitrogen-fixing bacteria enrich the soil1, and algae in marine ecosystems provide sustenance to a variety of organisms2,3. On the other hand, pathogenic bacteria cause diseases across trophic levels, changing the environment around them dramatically. Such interactions have been extensively studied for a long period of time. However, non-pathogenic host-bacterial associations also influence host physiology and even host behaviour4,5. For example, in mice, differences in gut bacterial communities determine utilization of specific dietary components and the propensity for diseases like obesity and diabetes6,7. Gut bacteria are also linked to several neurological disorders such as depression and anxiety8. Such dependence of animal hosts on their gut microbes is not limited to humans, but extends across the tree of life.

Host-microbial interactions are especially well studied in insects, which are one of the most abundant and diverse class of animals and occupy several ecological niches, with different diets, life-history traits and behaviours. Thus, studying host-microbe interactions in insects provides us with many general insights (Figure 1A). For instance, wood-eating termites rely on their gut bacteria to digest lignocellulose, a major part of their diet9. In fact, microbial nitrogen fixation accounts for 60% of the nitrogen content of some termite colonies4,10. In pea aphids (plant sap sucking insects), gut bacteria supplement their host’s diet with essential amino acids11.  Similarly, in mosquitos, midgut bacteria help lyse RBCs and aid efficient protein utilization12. Insects often feed on plants that contain toxins such as tannins and cardiac glycosides13 as well as artificially sprayed pesticides. Gut bacteria aid their hosts in occupying these niches by detoxification of such compounds. For instance, coffee borer gut bacteria detoxify caffeine in coffee seeds, allowing the host to feed on coffee beans despite very high concentrations of caffeine14. Similarly, bacterial symbionts of insects such as bean bugs and stink bugs allow them to detoxify insecticides15. These examples show that gut bacteria can aid host survival on a suboptimal diet. Thus, host-bacterial associations can allow hosts to occupy niches that were not previously available to them. In this manner, such associations could dramatically expand the ecological niche of the host.

These results in turn raise several questions. How important are these bacteria across different life stages? How do hosts maintain their respective gut bacteria, and how do the bacteria interact with the host’s immune system? In this review, we summarize recent studies that answer some of these questions.

Figure 1: (A) Factors influencing insect-bacterial association, and some benefits provided by bacteria to their hosts. (B) Mechanisms of bacterial transmission across generations. (C) Location of bacterial cells within insect tissues. 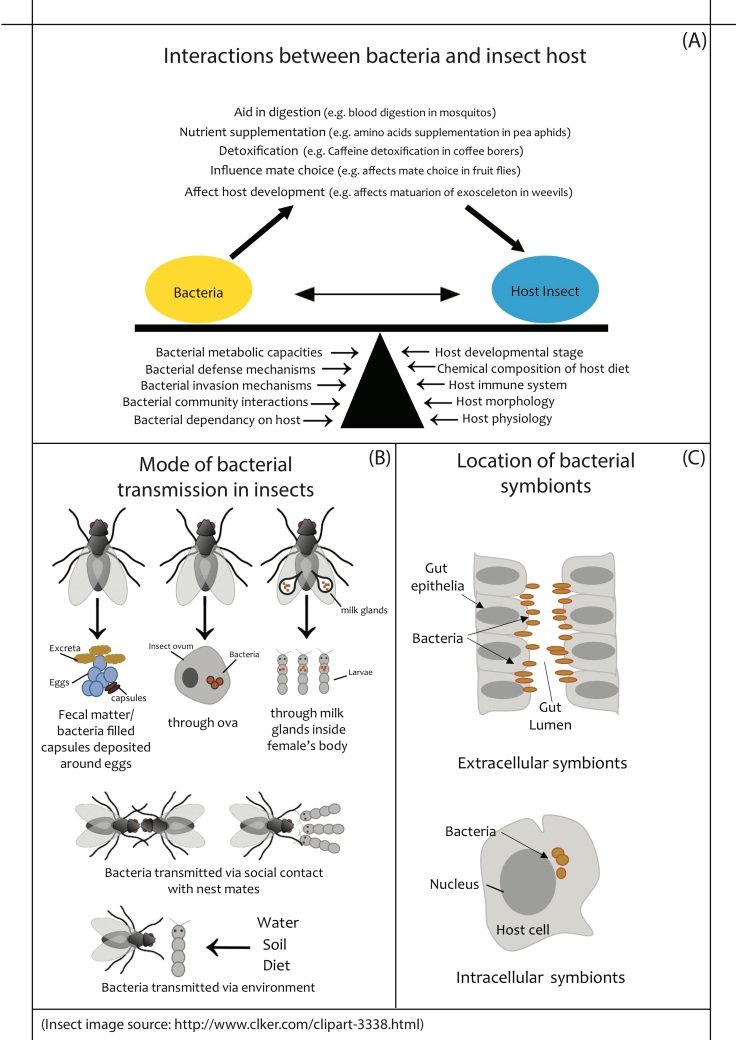 What is the effect of gut flora on development?

As mentioned above, gut bacteria can influence nutrient acquisition and detoxification, and may thus impact host development5. In fact, in many insects, gut bacteria are essential for proper host development. For instance, in stinkbugs, removing the bacterial symbiont Ishikawella capsulata from nymphs (juvenile stages) causes retarded development, arrested growth, and abnormal body coloration16. In weevils, removing endosymbionts via antibiotics prevents the hardening and maturation of the exoskeleton17. Larvae of the mosquito Anopheles stephensi also show delayed growth when treated with antibiotics. Interestingly, mosquitos carrying an antibiotic-resistant strain of the bacterium Asaia are not affected by antibiotic treatment18. Such host-bacterial interactions become even more important under food deprivation. When germ-free Drosophila melanogaster larvae face nutrient scarcity, their development is severely affected and mortality increases. However, larvae with an intact gut bacterial community can complete development even under nutrient limitation and their mortality is comparable to flies reared in nutrient rich media. Additionally, this developmental defect can be rescued by providing germ free flies with the bacterium Acetobacter pomorum19. Thus, in some cases even a single bacterium can have large effects on the host’s development. In some insects like fruit flies, termites and mosquitoes, gut bacteria can also influence the expression of genes involved in longevity and oviposition rate, influencing host fitness12,20,21. Thus, the maintenance of gut bacterial partners across life stages and across generations is critical for these insects.

Beneficial bacteria can be acquired through the environment, horizontally from conspecifics, or transmitted to the offspring vertically by their parents (Figure 1B). Different mechanisms of vertical transmission have evolved across insects 22,23. In pea aphids, weevils, cockroaches and whiteflies, bacterial symbionts live inside specialised host cells called bacteriocytes that are transmitted inside the egg17,24–26. In other insects, extracellular bacteria reside in the lumen of host tissue and are transmitted via many different mechanisms (Figure 1C). In the European beewolf, females cultivate the beneficial bacterium Streptomyces philanthi in specialised glands located near their antennae, and then spread it on the ceiling of the brood cell before oviposition27. Similarly, in insects like reed beetles, kissing bugs, and stinkbugs, the mother smears the eggs with excreta that contains beneficial gut bacteria28,29. In the Japanese plataspid stinkbug (Megacopta punctatissima), gut bacteria are transmitted in special capsules that are deposited on the underside of the eggs. These capsules are made in an enlarged section of the female midgut, and are packed with the symbiont Ishakawella capsulata16. Other insects like leaf-footed bugs lay their eggs in close proximity to their fecal matter23. In all these examples, the newly hatched larva ingests the egg shell and surrounding material, acquiring the bacteria. Other interesting cases include blood sucking parasites like tsetse flies, bat flies and louse flies. In these insects, while the adult form feeds on blood, the larval form develops inside the female body viviparously, fed by milk glands present inside the female. The milk glands provide nutrition as well as beneficial bacteria to the developing larva30. On the other hand, in social insects, gut bacteria are usually transmitted via social interactions. In honey bees and termites, adults tend to their larvae and feed them through trophallaxis (feeding larvae with regurgitated food), thus exposing them to the beneficial bacteria5. In bumble bees, social contact between young and adult bumble bees also transmits gut bacteria31 (Figure 1C).

Many non-social holometabolous insects have discrete generations, with little or no contact between parents and offspring. In such a scenario, maintaining a stable host-bacterial association across generations becomes difficult without strict vertical transmission. In these cases, insects often acquire bacteria from the environment. However, the environment can also contain other microorganisms that may not be beneficial, or may be pathogenic. Therefore, the host needs to selectively acquire only the beneficial bacteria. An insect’s gut morphology and physiology (e.g. pH, oxygen levels) creates selective niches that only some bacteria can occupy. For example, in the bean bug Riptortus pedestris, the insect gut has a sac-like organ that houses the symbiont. Food particles and other bacteria cannot enter the organ because the gastrointestinal tract is very narrow just before this organ. However, the symbiotic bacteria Burkholderia can pass through the constriction and reach the sacs32. Similarly, termites have specialized gut compartments that are highly alkaline, and thus allow the growth of only alkali-tolerant bacteria5.

The insect immune system also plays a critical role in the acquisition and regulation of beneficial bacteria. Studies with Drosophila melanogaster show that the transcription factor caudal suppresses antimicrobial peptide (AMP) production in the presence of commensal bacteria. However, AMP production is upregulated in the presence of pathogenic bacteria19. In fact, regardless of the mode of transmission, the maintenance of bacteria in their respective niches inside the host tissue is strongly governed by the immune system. For example, in flour weevils, the bacterial endosymbiont resides in a group of host cells called a bacteriome17. Weevils selectively up-regulate the production of the AMP colA in the bacteriome, but not in other tissues. On the other hand, another AMP colB is expressed in other tissues when pathogens invade the weevils, but not in the bacteriome. Moreover, the density of the endosymbiont in the bacteriome correlates with colA expression level. Thus, the weevils’ immune system restricts the endosymbionts to the bacteriome33,19.

Changes in bacterial genomes due to association with host

So far, we have discussed how bacteria can alter host phenotype. However such associations also affect the bacteria. For example, endosymbionts such as Wolbachia and Burkholderia tend to have very small genomes compared to their free-living relatives34. In fact, endosymbionts have amongst the smallest genomes of all known bacteria35. Since these bacteria live inside the host cells, selection for maintenance of several genes is thought to be reduced. Over time, such genes either accumulate mutations or are eliminated from the genome, thus leading to the small genomes of these bacteria36. The genes that remain conserved vary between different endosymbionts. These genes are often associated with the benefit these endosymbionts provide to their host. For example, Sodalis pierantonius is an endosymbiont of cereal weevils that feed on flour deficient in aromatic amino acids like tyrosine (Tyr) and phenylalanine (Phe). S. pierantonius has lost genes for many metabolic functions due to pseudogenization and rearrangements; however, the Phe and Tyr pathways have been retained37. Similarly, the pea aphid endosymbiont Buchnera aphidicola primarily retains genes for synthesis of amino acids that are required by its host26,35. A similar trend seems to occur with vertically transmitted gut bacteria, whose genomes are larger than those of endosymbionts but smaller than their free living relatives. However, genome reduction is not observed for bacteria that are horizontally acquired, presumably because they also have to survive outside the host and face selection to maintain metabolic pathways that are not essential within the host5.

Insect bacterial associations are complex, with both partners interacting with and influencing each other. For example, insect guts present niches that only certain bacteria can occupy. In turn, the presence of bacteria in the gut changes aspects of the gut physiology. In scarab beetle, microbial fermentation produces acetate, formate and lactate, changing the pH of the different gut compartments38. Similarly, the central region of termite guts is highly anoxic because the bacteria that reside there act as very strong oxygen sinks39. Thus, while host physiology and immune system select for certain bacteria, colonization by specific bacteria can also fundamentally alter the host tissue. Additionally, the insect immune system selects for specific bacterial partners. However, colonization by commensal bacteria can often prevent colonization by potential pathogens. For instance, aseptically reared lepidopteran larvae show a 20 fold increase in colonization by the pathogen Bacillus thuringiensis, compared to larvae with intact gut bacteria. Similarly, in the locust Schistocerca gregaria, gut bacteria secrete antimicrobial peptides that are selectively bactericidal but do not affect the indigenous bacterial species4. Thus, the presence of specific bacteria can shape the bacterial community associated with the insect host.

Such interactions have resulted in very specific insect-bacteria associations. In fact, across the insect phylogeny, the divergence of many hosts and their associated bacteria is correlated40. In some cases, bacteria can cause their hosts to choose mates feeding on similar diets, or change host preference for specific diets41,42. Over generations, such interactions can affect host diversification. Thus, we now understand that insect-bacterial mutualisms are complex interactions that are influenced by several factors such as insect physiology, immune system, morphology, diet, bacterial metabolism and bacterial community structure (Figure 1A). However, many questions still remain unanswered: how are these associations initiated, how quickly can they evolve, and what are the mechanisms governing host-bacterial associations? How frequently do bacterial partners influence host adaptation and diversification? Further investigation of such and many more questions will broaden our understanding of fundamental aspects of the ecology and evolution of both partners.